“We should grow our own,” she said. And that was it, five simple words from the One Who Would Be Vegetarian and my fate was sealed.

A few growbags on the patio is not much experience for a bit of self sufficiency, that I will grant you, and having a composter down the end of the garden, and nothing to use compost for, did seem a bit silly. My neighbours do still worry about me, a composter in the corner of a courtyard garden!

“But they are giving them away free” she declared, in that tone of perfectly reasoned logic that transcends all reason.

“The council, they’re giving composters away free.” It’s that same kind of logic that compels you to buy the third can of gloop in Asda, just because the two before means this one will be free, and you bask in your glow of consumer smugness, forgetting you did not really want that first one much anyway.

And then, there was the exercise bit too. Given a choice between regular appearances at a gym and a few hours of gently tendering out in the open watching ‘The Crops’ grow, well, it was a no brainer, and a woman at the council was given a phone call.

It seems I was very lucky, now-a-days there is a waiting list of some considerable size, and the very nice woman on the phone told me this too. However, I filled in the forms, as it seemed rude not too, sent them back, and kind of forgot all about it.

It was a scant three months later, as spring had just begun to arrive, and I was eyeing up the grow bags again, that I got a letter inviting me to consider which plot I would like, a map was enclosed along with a bill for a year's rent.

"Ooh", said the One Who Would Be Vegetarian, that’s cheap and it includes water too, let's go and have a look. And so we set off that very afternoon to take a stroll to see what it was all about, wearing the most inappropriate footwear. We had not even thought about it really. Rule one learnt – Allotments are for growing things, and ‘growing things’ need soil, which is a fundamental concept, unless it is attached to the bottom of your shoes, in which case it is ‘Sodding Mud -you have ruined them, how will you get this muck off?'

Loitering by the gate we snuck in and wandered around, trying to match the map to what we saw in front of us. None the wiser we seriously considered picking a plot number that added up to 9, as this would be very auspicious and a lucky number. In the end we did not, we simple asked one of the ‘Ol Boys’ which one we should have.

He humm’ed and aarr’ed a bit, related a tale or two of the underground river ‘that is all over that side and tends to flood in the winter’ and pointed us to a patch that was an absolute jungle near the fence. Now, I am not one to profess my ignorance lightly, and I knew that I was at a distinct disadvantage here, for before me was a man who I assumed knew how to grow a thing or two, and so far, of all the things growing around me, I could recognise a cabbage. But, I just had to ask him why, fearing a prank of some kind.

In a tone normally reserved for the not so sharp amongst us, he explained that if the soil can support big brambles like that, it must be fertile, and “those big brambles stop the light getting down to the ground, so you ain’t as likely to get all sorts of small weeds to dig out either”

He was absolutely right too. With the second borrowed strimmer (the first one had absolutely no where to plug it into!) and with a can of petrol this time, we set about cutting our swathe. We endured a couple of fractious days strimming everything we could down to the ground and piling it in to a great big heap…and then we left it for the summer, hoping it would be a nice hot one so not much would grow up in its place, and those big heaps of strimmed stuff would dry out and shrink down.

That’s exactly what they did, and one early September day, with a copy of the local rag and some matches I converted it all in to smoke… and that was as much fun as I had with the clearing process, some real work started next. The plot is next to the fence and long ago the houses the other side of the road had a reputation as a den of the highest dubiousness. My little plot made a fine dumping ground for an amazing variety of their detritus. We never found the body, but we could have reconstructed a couple of old cars with the bits I dug up.

The old guys was right enough, other than the car memorabilia, the bramble roots came out really easily, and never grew back. A few large plastic sheets bought at a bargain price from Wickes, when spread out, deterred anything small and dormant in the soil from springing back to life, and that winter a small patch of cabbages was planted and mostly left to fend for itself.

It is a bit strange, I think, and I am sure if anyone could be bothered to research it, you would find this is true. Every new allotment holder plants cabbages at first, and then realises they don’t really like cabbage much at all. It was a tradition I helped keep alive, along with the other one of spending as little money as I could. With a bit of cunning and keeping an open eye out, most things you would need can be found in second hand shops, or disused and borrowed from the back of friends sheds.

The shed that graces the plot now, is a fine example of English craftsmanship made out of traditional solid timber; it cost me an entire £5. I saw a neighbour down my road taking delivery of a new shed and rushed nonchalantly along to ask what was happening to the old one. The £5 was the cost of a few bits of new timber to replace a small hole in one side - bargain!

The second season was a lot more adventurous beyond mere cabbages. With some very cheap lengths of conduit and a roll of sheeting, some ‘ poly tunnels’ were constructed for aubergines and peppers. All this allotmenting came as a ‘godsend’ to family, who now had something new to buy me for Christmas; Books. I now have at least 30 books of how to grow veg of different kinds and took a more ambitious route with my choice of crops.

If I may now at this point give you a tip. Don’t bother with a ‘poly tunnel’ I managed one very small aubergine and a lot of wind ripped plastic. However, there are exotics you can grow in Carshalton. I have two thriving Goji Berry bushes, a Cranberry bush, lots and lots of Garlic, Blueberries, Red Gooseberries, Yellow Tomatoes and some very fiery Chillis.

Three years later, and it was worth every shovel. 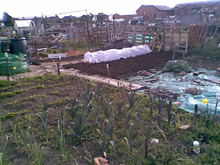 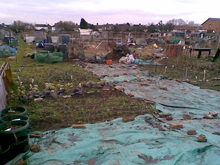 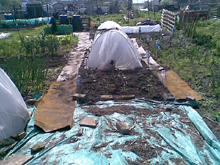 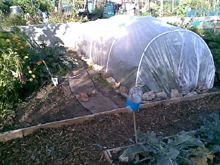 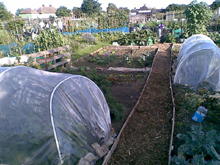 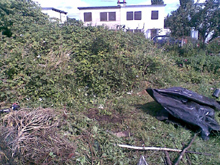 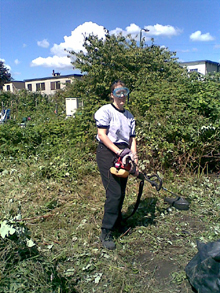 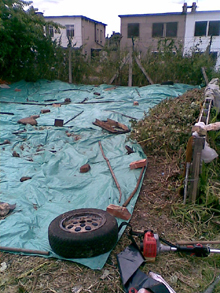 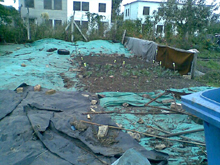